For many of us campaigning against the Health Bill this was a day we hoped we would never see. We fought for over 18 months to highlight all the dangers in the Bill to the NHS. During the last few months the legislation looked in increasing danger with many more groups opposing the Bill. But the political numbers were against us - with the support of the Liberal Democrats (in the Lords and the Commons) the Bill became law - without LibDem support the Bill would have fallen.

So we must ask - what next?

Many of us will continue the fight. In fact we will redouble our efforts. We will continue to highlight all the dangers to the NHS that will come about under this Act. We want to promote a fair NHS for all and we wish to see an NHS restored after the next election to one without enormous commercial influence.

There are doctors keen to stand for Parliament in order to have more influence. Given the recent shock by-election victory for George Galloway it would follow that a doctor standing for Parliament also has a very good chance of being elected. The Conservatives are already a little twitched by it. Even before the new party has been launched the Tory polling put the 'NHS party' on 18% - with the LibDems on 9%. Quite amazing.

It is important we continue to fight and oppose the Health and Social Care Act. Some wish to 'make the most of it' or 'work with it'. I disagree. We must of course do the best for our patients and many also believe we should show how bad this law is for the NHS and patient care and ensure we work to reverse all the damaging effects that will come about under the new Act. There will soon be a way for doctors and patients to report - via a website - worrying changes going on in the NHS in order to highlight and document them. This is so that we can show how the NHS is heading in the wrong direction by pandering to the commercial sector and opening up healthcare to big business.
Posted by David Wrigley at 2:29 AM 3 comments:

The Health Bill is in its final days in Parliament.

We have seen the Liberal Democrat Conference vote in a significant way against the Health Bill - presenting a problem for Mr Clegg and his Parliamentary colleagues. Grassroot LibDems have spoken out and said they do not like the Health Bill that Nick Clegg, their leader, and Mr Cameron are completely wedded to. Mr Clegg and Mr Cameron seem to want to ignore the hundreds of thousands of voters and healthcare professionals who have spoken out against the Bill.

We are now asking you to Lobby Your College again - for you to call on your own Royal College to send this letter to MPs as a strong message from the medical profession prior to the final vote in Parliament which is coming very soon.

Please could you copy and paste the text of the letter below into an email after having clicked on the link for your own College - and ask your own College to send it as an open letter to Parliament. You could also click the link for the Academy of Medical Colleges which is an umbrella body for all Colleges and ask them to lobby MPs.

Thanks you for you help once more in this most important matter.

"We call upon you parliamentarians to think again about the concerns raised by many 100,000's health and social care professionals and 170,000 members of the public about the bill being debated today. We urge you to put the interest of patients and the future of our health service ahead of party politics and halt this bill now. It is not too late. Once halted we can work with you and others to stabilise the NHS and to then create a health service fit for the 21st Century, based on co-operation and collaboration.

We consider that the Health and Social Care Bill, if passed, will damage the NHS and widen healthcare inequalities, with detrimental effects on patient care in England."

Briefing Documents on the Bill


The Observer recently featured an article about the role of the Medical Royal Colleges in halting the passage of the Health and Social Care bill through Parliament. Opposition from the colleges is important as they are the professional bodies concerned with teaching, training, research and standards of care. They can’t be accused of self interested union behaviour.

Congratulations to all the members who have used this website to call upon their colleges to hold Emergency General Meetings (EGMs) to discuss opposition to the bill. Most colleges have either now come out against the bill or have EGMs planned in the near future.

Many people, including doctors and other health professionals, are still unclear about the bill and the likely consequences if it is passed. We have therefore put together a briefing document for the general public and hope it will also be useful for those doctors attending forthcoming EGMs of their college to debate the bill. You can find it here. Please feel free to use it and distribute it far and wide.

We would also like to direct you to some useful documents and articles to update you on the Bill and its impact on the NHS and our patients. This picture shows just how many groups are opposed to the Bill - and those who seem to be in favour - well worth a look! There was also a longer article in the Lancet detailing some of the major concerns from the well respected academic Professor Allyson Pollock.

We heard some time ago from our Prime Minister making a statement that every NHS staff member welcomed at the time - but it hasn't somehow come about...

There are worrying implications for GP commissioners working under the Health and Social Care Bill. The legal implications are vast. This is an excellent paper to update you on the issues.

The Royal College of Physicians (London) have now decided to ballot all their members on their views on the Bill and in another vote decided to oppose the Bill which is a significant move for such a large body representing hospital physicians.

We also see the organisation representing doctors who look after older people - the British Geriatrics Society - withdraw support for the Bill now. It is difficult to find any organisation that now supports this Bill.

Many thanks again for your support and please keep your eye on this website for more updates soon. 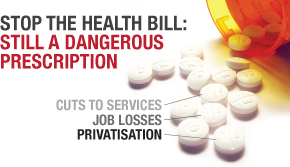 Posted by David Wrigley at 5:04 PM No comments:

The Royal College of Physicians (London) meets on Monday 27th February to discuss their position on the Bill and we are urging any MRCP/FRCP doctor who has not completed our survey on the Bill to do so now via this link.

It is clear there is concern at the very heart of government over this Bill - there is clear evidence here.

If you haven't yet completed our survey to lobby your own College then please do so here.

We will keep you updated about the latest developments as soon as they come through.
Posted by David Wrigley at 12:13 PM No comments:

Who was there and who wasn't?

The Downing St Health Summit 'tea party' came and went and some people turned up and some people weren't invited. Mr Lansley had some difficulty getting through the crowds who were opposing the Bill.  Who was on the invite list and who wasn't? We have compiled the list below for your persual.


Against the Bill - not invited


Undecided - invited to the summit


In favour of the Bill - invited to the summit

Meanwhile we are soon expecting further news with respect to another major Royal College to call an EGM due to survey responders on our website - watch this space.

Many thanks once more for your support.
Posted by David Wrigley at 12:25 AM No comments:


We have seen a new development in the Health Bill saga with the Prime Minister calling an Emergency Health Summit at Downing St to discuss 'implementing the Bill' in a few days time. Soon after the announcement it became clear that most of the key players in the NHS have not been invited. These include the RCGP, BMA, Royal College of Radiologists, the RCN and possibly others – all those who have spoken out publicly about how the Bill will damage the NHS irrevocably.

This hurriedly arranged meeting smacks of a coalition government in panic mode and an attempt to divide the medical profession. It is a desperate last minute attempt to seek support from some sectors of the medical profession and push through this unwanted Health Bill come what may. This is a political manoeuvre and shows quite blatantly what happens if you stand up for your beliefs and speak out against an ill thought out government policy.

Doctors want to protect the NHS and are the genuine voice for our patients.

If you are a member of a Medical Royal College please send two quick emails - one to your own College President and also one to the Chairman of the Academy, Professor Sir Neil Douglas suggesting they should publicly call for all Medical Royal Colleges to boycott this Summit. This will send a clear message that we will not partake in a blatant attempt to divide the medical profession and push through an unwanted and damaging Health Bill.

Here are the email addresses to click and send a message calling on the Academy and your College.

Thank you for your support.

At a Special Meeting today the RCR voted overwhelmingly to oppose the coalition Health and Social Care Bill.

The Royal College of Surgeons (England) today announced they would hold a Special Meeting to allow their Fellows to debate the Health Bill which is a great step forward.

We would ask you to continue to Lobby Your own College via this link.

We will also be setting up specific surveys prior to each EGM asking members of those Colleges whether they wish their College to support or oppose the Bill. This helps to inform the meeting itself.

We continue to ask paediatricians to complete our survey as their College require 600 members in order for a special meeting to be called. Quite a hill to climb but if you know a paediatrician then please ask them to complete the survey.

Many thanks for your support.
Posted by David Wrigley at 3:35 PM No comments: 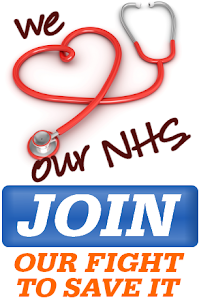 We are a group of doctors who have campaigned against the Health and Social Care Bill since it was first proposed in July 2010. We have done this because of the damaging changes it will bring to the NHS and our belief in preserving an equitable health service for our patients. We are now asking all doctors to support us in lobbying the Medical Royal Colleges.

We are also elected members of BMA UK Council working here in a personal capacity.

This site is endorsed by the NHS Consultants Association.